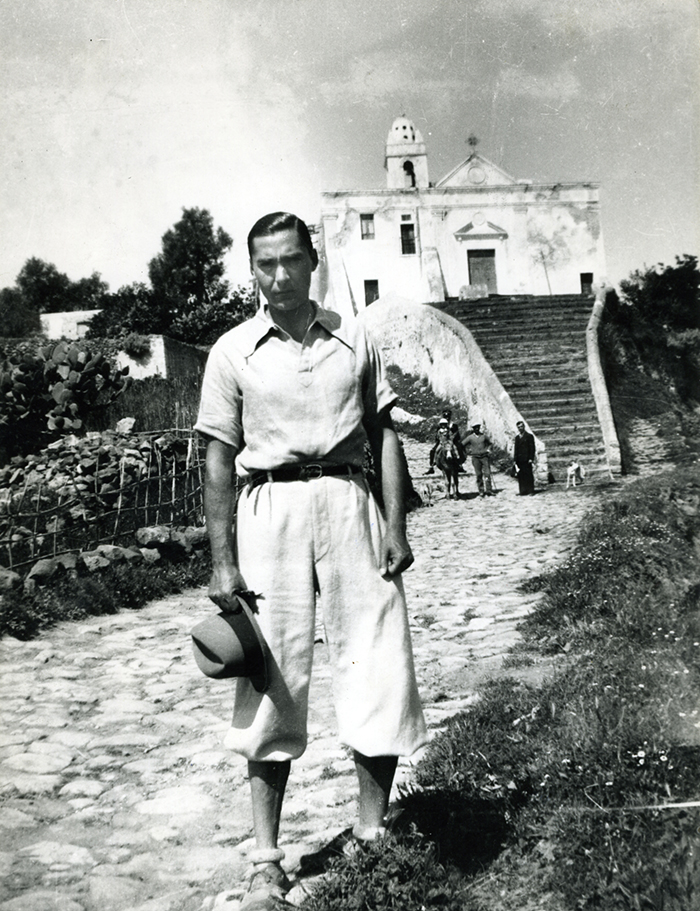 Curzio Malaparte, known for his literary works and for his house in Capri, also laid out some ideas for town planning, in a story called “City Like Me”, published in the book “Woman Like Me”.

I have divided these ideas under separate titles, for easy access to those who may find inspiration in the prose descriptions of these aspects of the imaginary town that Malaparte wanted to build with his “own hands: stone on stone, brick on brick”. The city for which Malaparte “would become architect, bricklayer, labourer, carpenter, plasterer”, for which he “would do all the jobs in order for the city to be mine, just mine, the way I want it from the cellars to the rooftops.”
The city would be built “on the ledge of a plain, in the mouth of a windy valley, at the foot of hills green with vines, olive trees, woods, cypresses, oaks and holm oaks: behind it mountains, with naked peaks and forests on the sides, where one can see the rock emerge between the broom. Soft yet pointed mountains which would encourage you to climb them and at the very end, just under the peak, would break your legs with fatigue.”

And these would be some of its core elements:

“Along calm riverbanks at the mouth of the valley I would place: villas on gentle slopes, murmuring streams that would descend between the folds of the hills, solitary small churches with the two carabinieri -cypresses in front of the parvis, and graveyards full of wild flowers, with tombs hidden beneath the grass like furrows beneath the wheat. And farmers’ houses, sun-drenched yellow barns, and lower down, as it approaches the city walls, I would give the river a dreamy appearance, the appearance of a farmer who descends to the city for the first time. But I wouldn’t want it to enter the city walls. I would like it to slide along the red walls, lazily stroking the rocks with their beautiful clotted blood colour: and for it to follow its course wandering through the fields, turning round once in a while to contemplate from a distance the towers and belfries oscillating in the azure air.”

The City as a Big House

“In order to enter the city from the riverside I would make a bridge out of bricks and stones. At the end of the bridge I would place a narrow and tall door, defended by merlons and barbicans, not because I would fear some nasty surprise from the inhabitants of the land, but to give the citizens the sense that the city is a house, a big house. Not only mine, but everyone’s: where, having closed doors and windows, one is able to rest from the efforts of the day.”

” I would open a good five doors in the tall walls: one for every wind, so that the country air would enter as the master without having to waste time looking for an opening. A door for the tramonto, one for the scirocco, one for the libeccio, another for the grecale, and the fifth for that seasonal breeze that blows whenever it wants, unmotivated, capricious and dawdling as it is, and if you don’t leave it room it will throw a tantrum and howl all night outside the walls, scratching the rocks, like a dog who finds the door to his home shut. And then you have to get out of bed and open the door.”

“I would not make the roads too wide or straight, but I would carve them along a careful and harmonious perspective that would emphasise the corners of the buildings, the backdrop of a church, of a wall, of a square.”

“I would want the houses to all be made of fine-looking stone, well-cut, with rooftop loggias open onto the gulfs of the sky. Some plastered in grey, others in that ivory white that becomes shiny and bright with rain and dust. Others I would build so that the bare and smooth stone could be seen to reflect the variation of light according to the passing of the sun.”

“I would want the churches to be pure and sad, with the facades made of white and green marble, with alternating bands, like the waving furrows of soft wheat and the indentation in the ground between one furrow and the next in the fields. The bell tower of each church, plain and slender with the grave sounding bells hung onto the beam, would be so that the children, from the square, could see the bells swinging with their open throats and the tongue-like clapper, appearing and disappearing from the large openings of the belfry.”

“Fine-looking fountains on the squares, with live water gushing from hidden mouths, would give a singing-like sense of cool to the surrounding houses on summer evenings, when ice-creams melt in the cups and the citizens fan themselves with straw hats.”

” A few statues here and there, under the porticos, in the parks, in front of the cathedral and the town hall, statues of saints resembling ancient heroes, and an Apollo that would resemble Christ, with a sweet air and that vague sense of remorse that appears on the statues of the Gods during passing processions.”

“I would want the roofs to be made of red tiles, well-baked, of that porous clay mix that collects dust and pollen like the beehive collects honey and wax, and makes that earthy substance from which a mould arises out of it, a green fur, at times a kind of grass flowering with white eyes. An expanse of red roofs: here is my city seen from above. Modern, but with a kind of ancient air, and rather old in parts.”

“Behind the houses, inside a boundary of very tall walls, I would want secret gardens, thick with pomegranates, magnolias, with laurels, where a numberless population of sparrows would chirp from dusk till dawn, and the chirping would light up the darkest corners of the houses.”

From:
Woman Like Me (Donna Come Me) (Troubador Italian Studies)